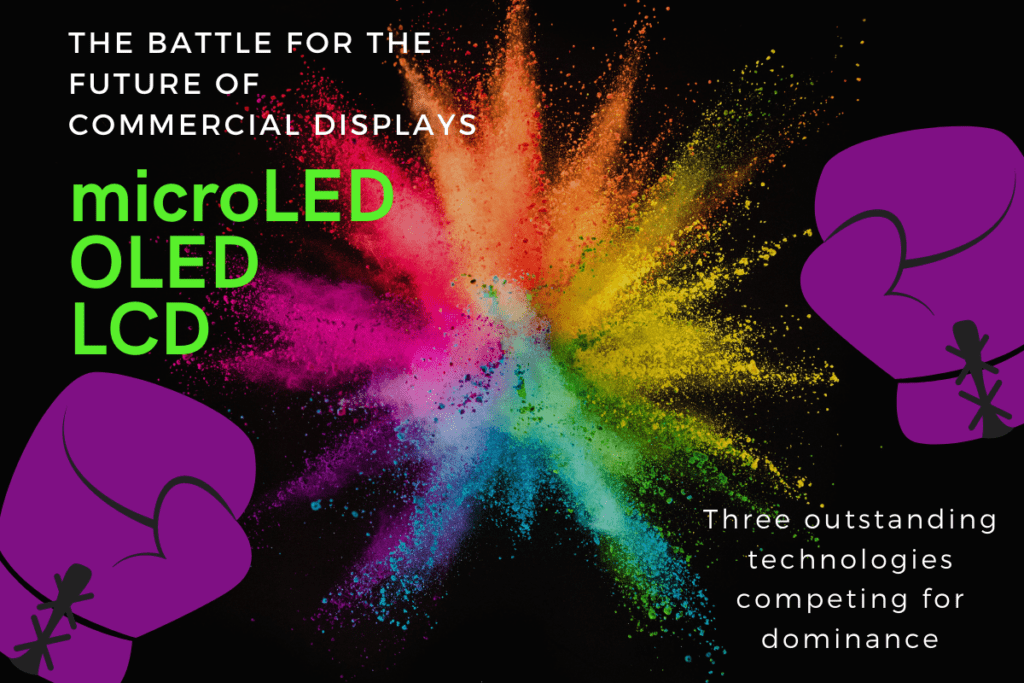 There’s a battle raging today – a quiet, but high-stakes match for the dominance of the video display industry.

Big changes are coming in the technology behind televisions, smart phones, and industrial, medical and wearable devices, with the display industry divided into three major camps.

In one corner of this triangular boxing ring is the trusted TFT liquid-crystal display, for at least two decades the dominant technology behind nearly all flat-panel displays. Developed originally for smaller industrial monitors, it has been expanded to as large as 150” diagonal for high-end TVs and digital signage, as well as shrinking to 1” or smaller for wearables.

In another corner is OLED, developed originally for smart phones and watches, but growing in the last two years into high-quality, highly innovative TVs and displays up to 89” diagonal.

In the third is microLED, conceptually similar to the direct-view LED displays used in outdoor signs and indoor video walls, but evolving to smaller and smaller pixels each year, until today, they’ve shrunk enough to compete in the TV and commercial display industries.

Each has its pros and cons but each is innovating with the same end in view. Which will you be using two to five years from now?

Essentially the transistors rapidly energize to align the crystals either with or against the directional light coming out of the first polarizer, creating dark or light pixels. The light is then filtered to color those pixels red, green or blue.

One issue with LCD is the blackness of the blacks. Because liquid crystals are never 100% opaque, some light from the backlight will come through the darkest pixels, limiting the contrast of the display.  Then, too, early LCD displays were lit with large fluorescent tubes in the backlight, and so there was a lot of ‘blooming’ where light would go around the dark colored pixels, also limiting contrast.

With the introduction of backlights using smaller, individual LEDs, blooming was better controlled, and today, with some high-end displays using as many as 30,000 mini-LEDs in ‘local dimming zones,’ controlled in conjunction with the LCDs they light, contrast is better still.

In an OLED display, used today in higher-end smart phones, tablets, and televisions, the pixels are created by red, green and blue light-emitting diodes, rather than by an LED backlight shining through an LCD matrix.

For that reason, blacks are blacker and contrast higher. When a pixel is off, it’s off. No light can shine through nor is there blooming around its edges. In addition, colors are more brilliant, viewing angles wider, the response rate is faster, less power is consumed and because there are fewer layers, the panel can be significantly thinner.

The technology is called ‘organic’ because organic materials are contained in the film that is manufactured onto the front of the glass substrate. These organic molecules are used because of their electrical conducting properties along with varied conducting levels.

One advantage of using them is that they can be mounted on a flexible substrate to create a ‘rollable’ television that retracts into a small cabinet or a rollable phone with a screen that gets bigger after you remove it from your pocket!

There are some downsides. Today OLED displays cost about three to four times more to manufacture than TFT LCD and are significantly less bright. Because the organic compounds decay over time, they have significantly shorter lifespans than TFT displays. Image retention is a problem, too, with the possibility of ghost images permanently ‘burned’ into the pixels as we once saw with plasma displays.

For all of these reasons, OLED is less than ideal for any application where a static image may be displayed for long periods or where the display will be on continuously for many hours each day.

MicroLED is an up-and-coming display technology using tiny LEDs that, like OLEDs, form the individual pixels within the display.

As with OLED, blacks are blacker and colors more brilliant than TFT LCDs, and there is no backlight. In this case, however, the LEDs do not include any organic materials, and so there is far less degradation over time and no image retention. Brightness is higher as well, with the brightest microLED displays at 4,000 nits or higher versus 1,000 (at most) for OLED. The resulting images are even more impressive than OLED and the displays last much longer.

Like OLED, microLED displays are very thin, can be made flexible and transparent, and one manufacturer (Vuzix) even showed smart glasses using microLED technology at CES this year.

MicroLED has another advantage, modularity. The video wall industry has long used bevel-free LED modules that can be fitted together into almost any size wall, and this technology is no different.

Given the complexity of the manufacturing process, it’s always harder and more expensive to build a larger or higher-resolution TFT or OLED panel than a small. But instead of building, say, a perfect 34” x 61” panel to create a 70” diagonal display, a microLED manufacturer might build four 17” x 30.5” modules, then combine them to create the finished product. That means that the cost per pixel is uniform no matter the size of the display, and while a larger or higher-resolution display will cost more than a smaller, the price increase is linear, versus an exponential increase for non-modular technologies.

Of course with video walls, the size of the pixels can be very large, because the displays are so big and meant to be viewed from a distance. But the “micro” in microLED means that the pixel sizess are in the range of .4 – .9mm (like TFT and OLED). So now this modular technology is becoming practical for smaller televisions and industrial displays.

That said, the big limitation on microLED is still cost. While the technology is commercially viable for very high-priced video walls or TVs for the luxury market, it is not yet price competitive with TFT or OLED.

Which of the three is best?

It’s very possible that no one of these technologies will be ever be completely dominant, because each has its own advantages for certain applications.

Today, OLED has an edge for portable devices and wearables, because of its low power consumption, thin structure and high image quality. But whether it can hold that lead over microLED as that technology develops is anyone’s guess.

For large screen displays and video walls, whether in digital signage or command and control, it’s likely that the modularity of microLED will give it an edge. If its current advantage in brightness and contrast continues, it may be the best for any kind of outdoor display, whether in signage or in outdoor-use instruments, phones and tablets.

Still, TFT has such a great cost advantage that OLED and microLED may never be able to catch up.  And if its manufacturers can continue to improve image quality, it may remain close enough to parity with the others that, for price-sensitive portions of the market, it will remain dominant.

If we have to make a prediction – TFT will remain champion for at least 2-5 years, with OLED and, after a delay, microLED manufacturers doing their very best to knock them out of the ring.

© 2023 Macnica Displays - is a division of the Macnica Group
Site Handcrafted & Managed By: Web Designs Your Way - Content By: Kreski Marketing